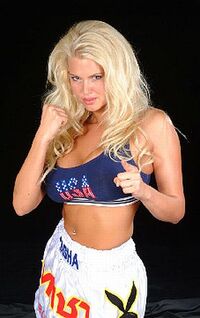 LaTasha Marzolla (born on August 21, 1979) is an American Mixed martial arts fighter and kickboxer currently competing for Tuff-N-Uff Amateur Fighting Championships. She is noted for being a former Playboy glamour model.[1]

Marzolla attended Las Vegas High where she participated with their junior varsity wrestling team. She decided to learn self-defense after her house was robbed and enrolled in Muay Thai with Master Toddy.[2]

She has appeared in several Playboy Special Editions series and was chosen as the 2004 Model of the Year.[3]

Marzolla pursued a career with the professional full-contact kickboxing promotion K-1 under the nickname of Venus. She has a kickboxing record of 9-3.[4] In 2004, she also had a brief career in professional wrestling after signing with WWE to train in Ohio Valley Wrestling. She was released along with a fellow model Bobbi Billard due to injuries.[5]

Along with Gina Carano, she appears in the 2005 quasi-documentary Ring Girls which is about five women who, under Muay Thai trainer Master Toddy, fight in Las Vegas and Thailand.[6]

LaTasha currently trains at Xtreme Couture in Las Vegas and was formerly under trainer Shawn Tompkins.[7][8] On May 30, 2009 she made her MMA debut, defeating Christy Tada by corner stoppage at the end of round 1 in a Tuff-N-Uff event in Las Vegas.[9]

Latasha has a younger brother named Michael.[2] She has two children, a son and a daughter.[7]

Community content is available under CC-BY-SA unless otherwise noted.
Advertisement